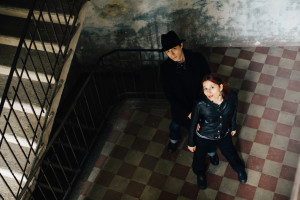 Ciaj Rocchi and Matteo Demonte wrote a graphic novel on Matteo’s grandfather who was one of the first Chinese to migrate to Italy, Springs and Autumns (春秋). “We brought to the attention of a wider public a story that was no more than a subject of study. In August our book will be presented at the Beijing International book fair and we have just launched our new work Chinamen”.

Wu Li Shan (吳立山) arrived in Italy in 1931, he was living in a nice casa di ringhiera, what we might call today a public housing estate, consisting of apartments that shared a communal balcony. Only a short distance walk away from Paolo Sarpi street, which is today’s beating heart of Milan ‘s Chinatown. “The story of my grandpa, is the story of Milan’s Chinese community”, says Matteo Demonte, Mr. Wu’s grandson, “it offers a cross-section of the city’s contemporary history, and the people who passed through the same events that hit the city throughout the whole twentieth of the century, including the war, the bombings and the economical boom of the sixties”.

The Chinese community’s path in Milan hasn’t been a simple one. Institutional policies for integration were basically non-existent or in other cases disastrous. When you enter Chinatown, there is no Paifang welcoming you, but suddenly people and shops, which are mostly Chinese, appear.

“Even if it’s not circumscribed as in other cities, like London for instance”, says Agie (周胡健), a local business man, ”Milan’s Chinatown is unique in the world. There’s no other example where there’s been a such strong fusion and integration between so different cultures”.

Ironically, this multi-ethnic area offers an authentic glimpse of the old Milan. The neighboring places have developed in altitude with modern architecture consisting of skyscrapers and glass buildings. But around the Paolo Sarpi neighborhood you can still find little streets with the same old style houses as the one where Matteo’s grandfather was living almost a century ago. 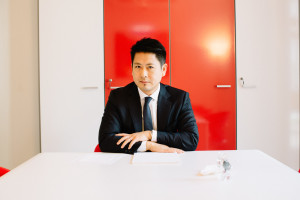 During the nineties till around 2006, Chinatown was a problematic area in Milan. Back then, the area was a wholesale trading place and the central street was packed with vans unloading and uploading all kinds of goods. Consequently, local gangs controlling the racket asked for blackmail money. Now all of that looks like a distant and fading memory. Obviously crime hasn’t been defeated yet, but the feeling of vulnerability and being unsafe surely has.

‬“There are two major key factors which have produced the change in the area” explains Hu Dan Yi (胡旦怡), a company lawyer, “The first one is a generational factor, the second one is the city planning and the turning of Paolo Sarpi street into a pedestrian zone. However, we should also consider other factors such as the economic crisis of the last decade, where many wholesale traders had to shut down the business, and were replaced by youngsters with a fresh new vision of business”. 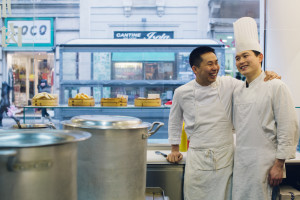 Agie (on the left) in his new shop. “The future of Paolo Sarpi street and Milan’s Chinatown depends on the mindset of the people living in these places. . If the residents and the business men will be able to take advantage the beauty of this area, we will surely have a bright future”.

This new idea of business is easy to spot when observing the evolution of food culture. Agie graduated in one of the most well known private Universities in Italy, Bocconi. In 2015, following his dream, he opened his first shop in Paolo Sarpi street. With his Baozi and Roujiamo, Agie is bringing a bit of the real Chinese food culture to Milan. Up until a few years ago Chinese cuisine in Italy was synonymous with low budget and low quality food. “It was the falsification of Chinese cooking art taken to exasperation point”, explains Agie. In a little more than a year, and after the prestigious recognition by Gambero Rosso magazine as best street food in the region, Agie opened the other shop a few meters away from the first one. “Our success comes by our choices: flour, meat, all premium quality products without additives, and everything simple and transparent”. 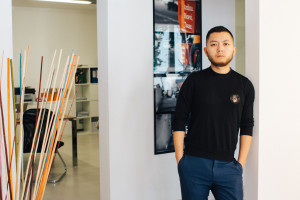 Fashion designer Jacopo Hu in his studio. “I was born in 1988 in Fujian, my family was hailing from Zhejiang. We moved to Italy in 1998. In the last decade I have experienced a different attitude towards the Chinese. Surely the fact that many Chinese have become successful, therefore more affluent, helped, but the key factor is the cultural changing investing China”.

Milan is renowned for fashion worldwide, however even if there are thousands of Chinese students coming to the town to study fashion resulting in some of them continuing their career here, it looks like the local Chinese haven’t been able to focus on it yet.
Jacopo Hu (胡文龙) is one of the few exceptions. He decided to quit his studies in Computer Engineering to follow his passion, “I was lucky that my family left me the freedom to choose. Due to their mentality, many families push their sons to become lawyers or doctors”. Graduating at Marangoni University, Wenlong founded his first brand Ange Wolf, “After two years”, says Wenlong, “I noticed that the Chinese market was not ready for my design yet. So I turned to another project and in 2016 I created Love Stuff ”. In Milan there are many Chinese fashion designers, but they became famous firstly in China, then they moved to Milan. “Fashion is different from all the other fields. It’s a closed circle. You need to be versatile, but at the same time you need your own style and make it adaptable to people’s tastes”.